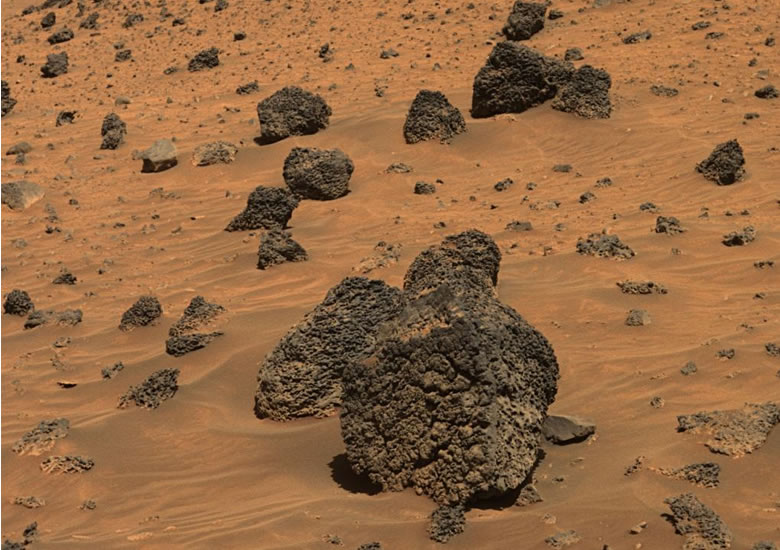 This satellite image acquired by NASA’s Mars Reconnaissance Orbiter in July 2015 shows a sand dune moving over a highly-fractured bedrock surface that has been broken by physical stress and temperature change. The leading surface of the sand dune is covered with sand ripples.This is just one out of an enormous field of dunes. Image by NASA (source Geology.com).

According to Geology.com A variety of rock types and sediments have been found on Mars. Many are similar to rocks on Earth. 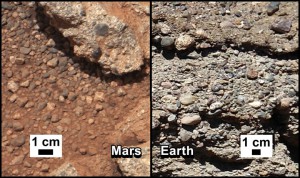 This photograph on the left was taken by NASA’s Mars Rover Curiosity in 2012 using its mast camera. It shows a portion of an outcrop of a rock similar to the conglomerates found on Earth. The pebbles below the rock are clasts that have been weathered from the rock. The photo on the right is a conglomerate outcrop from Earth to show similarity (source: Geology.com).

The presence of conglomerate and sandstones on Mars is evidence of moving water. Wind is not strong enough to pick up pebbles over one centimeter in diameter and carry them along in the current. The pebbles in this rock show a high level of rounding which implies a significant distance of transport. The red color is thought to be iron staining, which is nearly ubiquitous on Mars and gives it the name “Red Planet.” The “cement” that binds the particles in these rocks could be a sulfate mineral. Image by NASA (source: Geology.com).

Today, Rocket21, in collaboration with NASA and the National Institute of Aerospace, has officially launched their most ambitious competition to date — a series of “Journey to Mars” challenges asking Gen Z youth to imagine the vast array of problem solving and innovation that will be required in order to make exploration of Mars possible.

Timed to coincide with NASA’s release of its planetarium video “Journey to Mars,” and the theatrical release this Friday of The Martian starring Matt Damon and Jennifer Chastain, the competition will ask students to complete five challenges to help them identify and address hurdles inherent in planning and executing the journey. The ultimate deliverable for each student is to create and record a 90-second podcast presenting their recommendations. 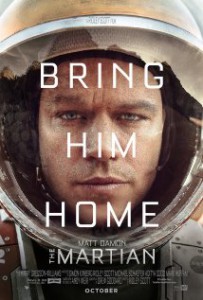 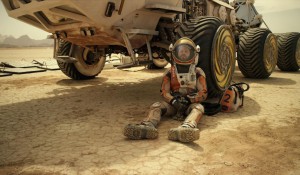 Rocket21 members’ efforts will be supported by educators, engineers and a wide range of subject matter experts from the NIA and NASA. The competition will run through January 25th. A group of twelve finalists will be selected to work with the producers of NIA’s “Innovation Now” to refine their submissions for broadcast to their 10 million listeners.

During all five phases of the contest, NASA and NIA (with Rocket21’s support), will be executing a significant outreach effort to educators in their national networks, professional associations, and education publications/newsletters targeting the K-12 market.

On February 28th , two grand prize “winners” will be selected to attend the 2016 USA Science & Engineering Festival on April 16th and 17th, and tour NASA. To encourage the broadest participation possible, NIA and Rocket21 will be offering a wide range of other prizes as well, including official recognition from NASA and NIA, NASA merchandise, cash, broadcast and web exposure on Innovation Now, and trips to major STEAM events.

Here is the link to the contest:

According to npr news “Scientists who have been hunting for another Earth beyond our solar system have come across a planet that’s remarkably similar to our world.

It’s almost the same size as Earth, and it orbits in its star’s “Goldilocks zone” — where temperatures are not too hot, not too cold, and maybe just right for life.

But a lot about this planet is going to remain a mystery, because it’s 500 light-years away.

Researchers detected the planet while poring over data collected by NASA’s Kepler Space Telescope. The telescope spent years staring at 150,000 stars, watching for telltale dips in brightness that might mean a planet was circling around a star.

One small star in the direction of the constellation Cygnus showed signs of five planets. Four of them are tucked in close to the star, so they’re probably too hot for life.

But the fifth planet looked special.

To read the complete article please go on the following link.

According to CNN, flights have been canceled across southern Japan after the country’s largest active volcano erupted, spewing thick clouds of ash high into the atmosphere.

Black smoke was sent as high as two kilometers, prompting the cancellation of at least 20 flights on Monday, according to NHK, Japan’s national public news network.

ANA grounded at least two flights connecting Kumamoto, which is 20 kilometers from the volcano, to Osaka and Tokyo.

The airport serves mainly domestic routes, but has connections to Taiwan.

JAL announced on its website that “flights from and to Kumamoto airport are experiencing irregular operations.”

“We found that the smoke rose not only vertically but also horizontally. The eruption could have pyroclastic flows,” Sadayuki Kitagawa from the country’s meteorological agency says, referring to the fast currents of gas and hot rocks often emitted by active volcanoes.

Officials closed a four-kilometer-wide area around the crater and evacuated about 30 people.

The agency also issued a level three warning on its five-level scale, advising travelers to stay away from the volcano.

Mount Aso measures 128 kilometers in circumference and is 1,506 meters high.

For more information go to: http://www.cnn.com/2015/09/14/travel/aso-volcano-erupts-japan-flights/index.html

The agency said it was evaluating the spectacular nighttime eruption, but indicated it was “stronger than the first one.” 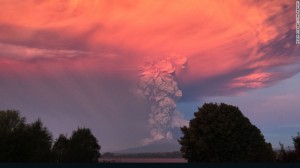 About 23½ inches (60 centimeters) of ash fell in some places, according to the Ministry of Interior and Public Safety.

Authorities issued a red alert for the towns of Puerto Montt and Puerto Varas in southern Chile. Both are popular tourist destinations.

A 12-mile (20 kilometer) exclusion zone was established around the crater. Military and police forces were assisting with the evacuations of more than 4,400 residents, the Interior Ministry said.