Create Vocabulary cards that includes the definition and a picture for each vocabulary word.

Energy: The ability to make something happen.

Electrical energy: the energy that flows through wires and powers the lights and appliances in your house.

Heat energy: This energy is also called thermal energy, which is the energy of the moving particles that make up matter. The faster the particles move, the more heat energy they have. An example – rubbing your hands together, they become warm.

Nuclear Energy: The energy stored in the nucleus of an atom. Example –The heat and light from the sun are produced from this type of nuclear reaction.

Thermal pollution: Damage that occurs when waste heat enters the environment. When energy changes form, some of the energy is always changed into heat. Example: The water in lakes and rivers is used to remove waste heat from power plants. The waste heat makes the water warmer. If the water becomes too warm fish in the lakes will die.

Law of Conservation of Energy: This law says that energy cannot be made or destroyed, but only changed in form. Energy can also move from place to place, however, energy can never be lost.

E is energy, m is matter , or mass and c is the speed of light. His equation showed that a small amount of matter could be changed into a huge amount of energy, and this is what happens in the Sun.

Midwinter Break: Homework – using the information and class code that you utilized in class complete the lessons for African-American History. This information is background research to prepare you for Unit 3 Dynamic Equilibrium.

Do not use Wikipedia. Include one page that list your sources, these are books, articles, BrainPoP videos etc. that explains where you received your information.

Your project must contain all of the following information:

A one paragraph explanation of the name of the scientists who discovered or produced this element, as well as how this element is used and where it can be found. Explain if this element can be combined with other elements to form new compounds.

Draw a diagram of this element or include a picture.

An example of this project is as follows:

Say what? Hydrogen is pronounced as HI-dreh-jen.

According to Jlab.org scientists had been producing hydrogen for years before it was recognized as an element. Written records indicate that Robert Boyle produced hydrogen gas as early as 1671 while experimenting with iron and acids. Hydrogen was first recognized as a distinct element by Henry Cavendish in 1766.Composed of a single proton and a single electron, hydrogen is the simplest and most abundant element in the universe. It is estimated that 90% of the visible universe is composed of hydrogen.Hydrogen is the raw fuel that most stars ‘burn’ to produce energy.  The sun’s supply of hydrogen is expected to last another 5 billion years.Hydrogen is a commercially important element. Large amounts of hydrogen are combined with nitrogen from the air to produce ammonia (NH3) through a process called the Haber process. Hydrogen is also added to fats and oils, such as peanut oil, through a process called hydrogenation. Liquid hydrogen is used in the study of superconductors and, when combined with liquid oxygen, makes an excellent rocket fuel. 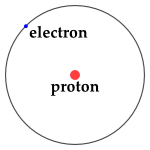