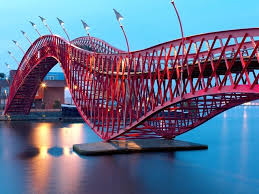 Essential Question: What is compression? What is tension?

The following words and definitions were discussed in class and should be written in your notebook. Create vocabulary cards to help you study. 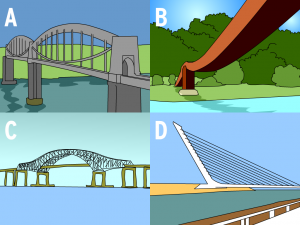 In the movie, Tim explains the three main kinds of bridges, but engineers have tweaked those basic designs in dozens of ways. These are just a few of them.

Brunel Truss: A hybrid arch-suspension bridge, the one-of-a-kind Royal Albert Bridge (A) is suspended by cables from an arched metal tube. Trusses crisscrossing below the arch give added support.

Stressed Ribbon: Would you drive a car over something called a stressed ribbon bridge (B)? A variation on the suspension bridge, the ribbon arcs up and down between supports. Despite the name, they’re actually stiffer and more stable than traditional suspension bridges.

Cantilever: A cantilever bridge (C) is basically a beam design, but with one important difference: the beams are supported on only one end, just like a diving board. Most of these bridges have two cantilevers—one on each side—that meet in the center.

A tall suspension bridge usually provides enough clearance for big ships to pass underneath—but they are expensive. So engineers have developed a slew of smaller, moving bridges instead!

Drawbridge: This classic design, featuring one hinged end that can be hoisted with ropes or chains, has protected castles for hundreds of years.

Bascule: Often called drawbridges, bascules like the Tower Bridge in London are the most common movable bridges. Counterweights hoist the split roadway upward.

Swing bridge: The central section of a swing bridge uses motors to rotate 90 degrees when boats have to get by.

Curling bridge: There’s only one curling bridge in the world: London’s Rolling Bridge (pictured). It consists of eight triangular segments that can curl up into a circle, thanks to hydraulic pistons. 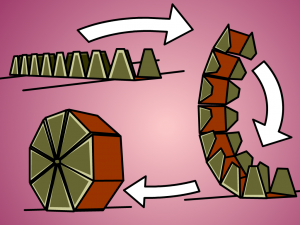 Links to websites about the history and mechanics of bridges