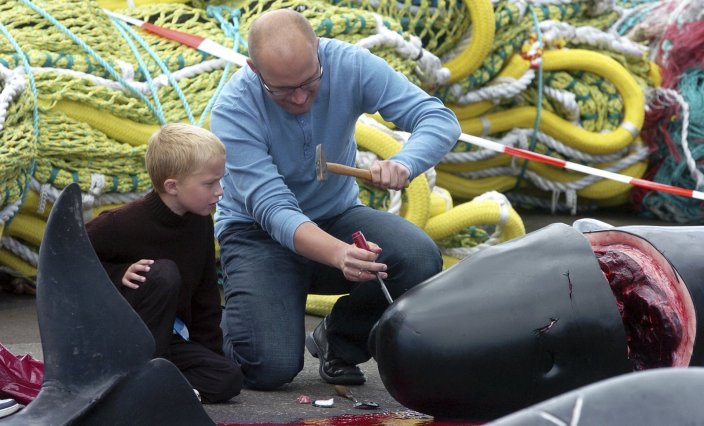 Based on our research of  the practice of “The Grind” complete the claim, evidence and reasoning worksheet that you received in class. This information is outlined below and is due on Monday May 2, 2016 when you return to school:

According to the movie “The Grind”, the hunt known as a ‘grind’, uses fishing boats to drive North Atlantic and migratory North Sea Pilot whales into shore and roping and hauling on them until they beach themselves, people then saw at their heads with long knives, severing their spines, and letting them bleed to death. According to the inhabitants of Faroe Island, the grind is just an outdoor slaughter house. The Faroe Island, is located in the Kingdom of Denmark. Martin Floghamri, a Marine Engineer, stated that their survival has relied on whales because not much else is available on the island. There are no forest, no wildlife, and they raise only have sheep. In order to hunt the whales they attach trackers on them, and have kept records of this hunt for hundreds of years. This is a legal hunt in their country, their country is not part of the European Rule where whaling is illegal. Some of the inhabitants regard the Shepherds Crew as terrorist. The president of the Shepherds Crew, Lamya Essemlali describes the practice as inhumane, She stated that “they can’t stop the accidental slaughter of these whales due to climate change and pollution, but they can stop the practice of the “grind” as it is planned. These whales are social creatures and wont leave other whales in their group if they are injured. The worst last whale to die part about the grind is that the last whale to die has seen all the other whales die. The inhabitants can eat other animals beside whales. These whales had a good life before then they kill them as a sport. Essemlali believes that they use the grind as stress relieve, because they like to kill and are addicted to this hunt. The inhabitants are aware that whale meat contains methylmercury, due to pollution in the sea and their doctors have informed them to stop eating whale meat because it is dangerous to their health, especially pregnant woman.

According to One Green Planet History of the Grind, The “grind” earns its name from the Faroese word for pilot, “grindhval,” and dates all the way back to the late 1500s. Back in the day, Faroese people relied on whale meat as a primary food source and developed the method of herding and stranding small cetaceans (dolphins, porpoises, and pilot whales) on designated beaches. Since the 1500s, over 1,000 cetaceans are killed each year in this manner. It could be inferred that around 428,000 cetaceans have been brutally slaughtered since the beginning of the grind. Entire pods of dolphins and whales can be eliminated in a single day. Mercury is the number one culprit, but arsenic, lead, cadmium and zinc, along with other metals can be found embedded in blubber. Fat tissues store toxins to help keep these animals well, meaning these levels are highest in the meat and blubber consumed by humans.

In 2008, the Faroese Chief Medical Officers announced that due to high levels of toxins, an adult should not eat more than one meal containing pilot whale meat a month, girls and women should refrain from eating whale meat or blubber entirely if they plan to have children, pregnant women should also never eat pilot meat or blubber, and the kidney and liver of whales should never be consumed.

How will hunting the Long Finned Pilot Whales at Faroe Island affect the aquatic ecosystem in the North Atlantic?

Claim: A  sentence that answers the original question. Write a claim to answer the question above.

Evidence: Scientific data that supports the student’s claim that must be appropriate and sufficient. Can come from an investigation, or other source such as observations, reading material, archived data, or other. Based on our research explain the evidence that was discussed about “the Grind” by the inhabitants, Shepherds Crew & your classmates.

Sentence Starter: According to…. it stated that…..

Reasoning (Conclusion/this is the because): Use your evidence to write the reasoning that supports your claim. . Reasoning involves building a logical argument about the relationship between the claim and evidence.