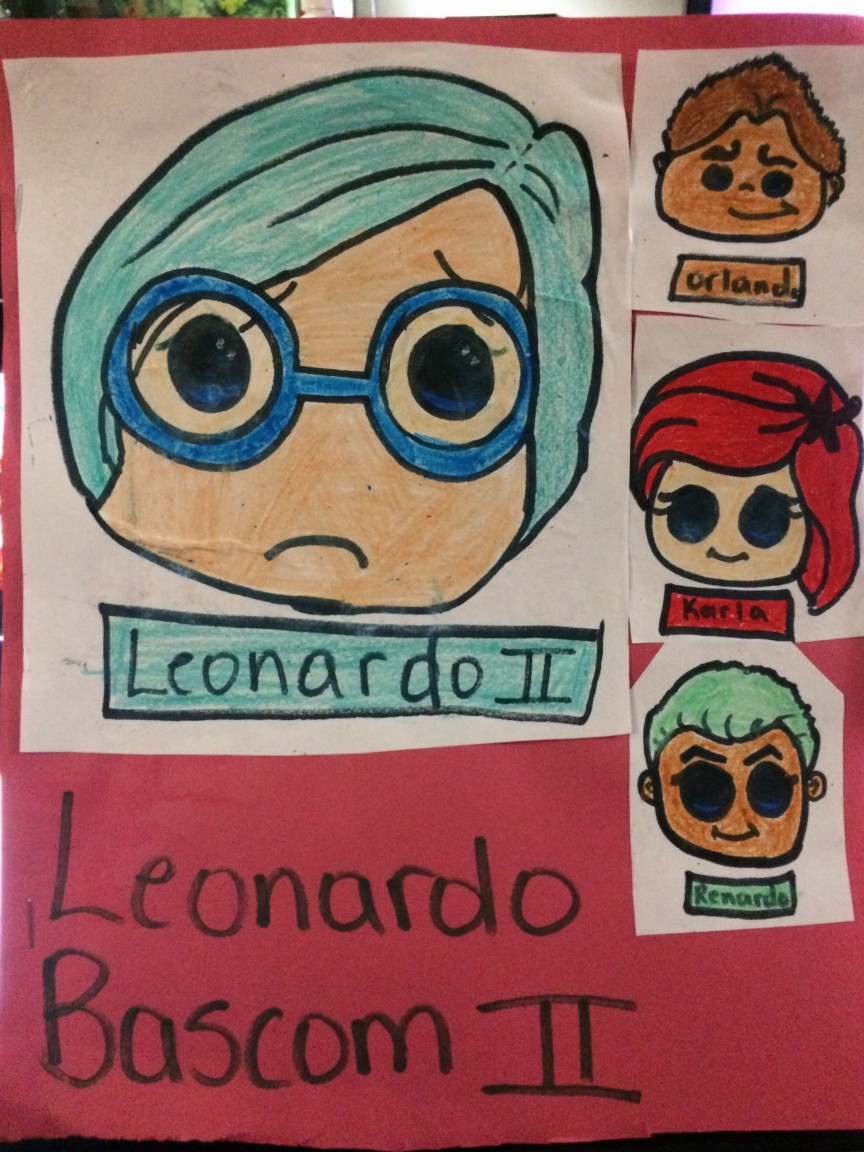 Unit 1: Final Science Project submissions are in! – Students created a range of fiction & non-fiction children stories as well as essays that showcased their artistic creative side and their scientific inquiry about the world around them. Take a  few minutes and read about some of their stories, view their illustrations and creative book cover designs: 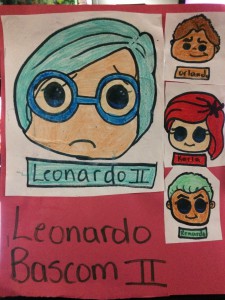 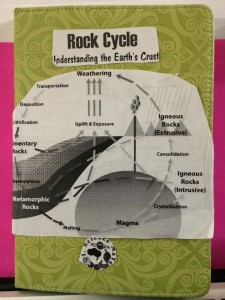 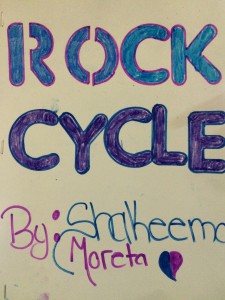 Gabriel creates the life story of Leonardo Bascom, an igneous rock who has been “going through a lot of  changes lately” Leonardo and his brother Renaldo share their stories in a way that helps younger students to understand the phenomena that transformed them all.

Shakeema’s rock cycle story introduces us to Gary Nite, Oliver Dan and Sandy Stone. These three sedimentary rocks were on their way to school to learn about how they were made. 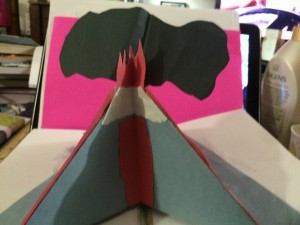 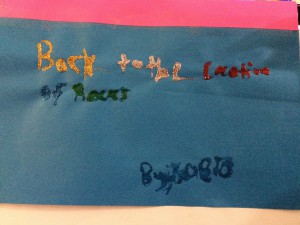 Sherell creates a diary to not only share about her feelings but to also talk about what she has learned about the rock cycle. In her diary she writes “I have learned a lot over the past few months. I’ve learned about love, lost, success, failure and hate, but one thing that interest me the most is the rock cycle”. Sheryl’s diary provides pop ups of volcanoes as well as illustrations of igneous, sedimentary and metamorphic rocks.

Kaela’s story introduces us to Jimmy an igneous rock, Sally a sedimentary rock, and Ricky a metamorphic rock. Kaela narrates her story in a manner  introduces her rocks and the phenomenon that created them as well as what can transform them. 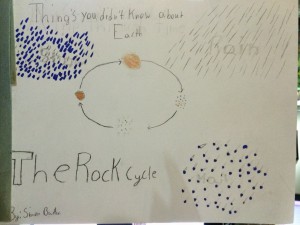 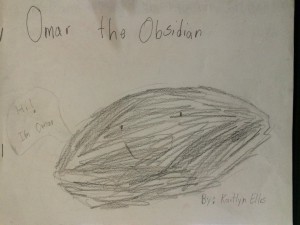 Simon introduces the rock cycle as “Things You Didn’t Know About Earth”.  His story is a non-fiction account of what happens in the mantle as well as on the crust. His story begins with intrusive and extrusive rocks. His illustrations introduced us to organism such as worms, that live in the soil where we find a variety of rocks.

Kaitlyn’s story begins when a volcano erupted on August 13, 2003 and created obsidian rocks  “It took almost a full year for it to cool down to a molten rock. One rock was special, he was not like the other obsidians”, his name was  Omar. Omar’s journey takes him being an igneous rock, to a sedimentary rock and transforms him to a metamorphic rock. Just when you  think the story is over Omar’s journey begins again. 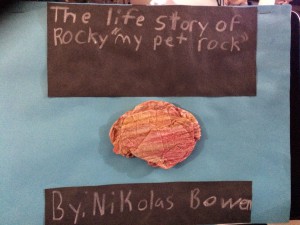 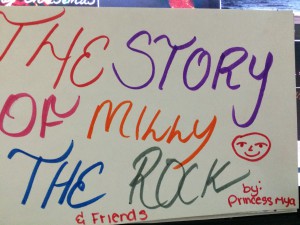 Nikolas introduces us to his pet rock, “Rocky”. In this nostalgic story a young boy is surprised on Christmas day, when his mom tells him that the family is going on a trip to Hawaii! On the airplane Nikolas tells his mom about what he “learned in school about volcanoes and how rocks were formed”. Nikolas introduces his readers to Rocky and explains how this pet igneous rock was formed.

Mya introduces us to Milly, the metamorphic  rock. Milly “was created by a lot of heat  and pressure”. Her “mothers  name was Mya the rock, and her dad’s name was Phillepe”. Milly’s story explains how she can change into a sedimentary rock as well as into an igneous rock. This funny short story also introduces us to Iggy the igneous rock, and Cyd the sedimentary rock. 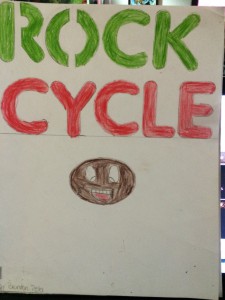 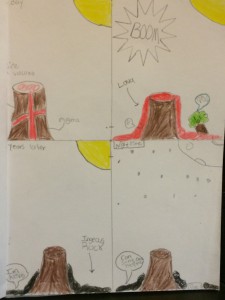 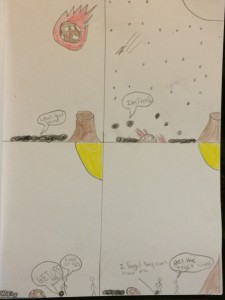 Brandon creates a comic book in order to introduce his readers to sequential images that brings the story of a rock formed by lava to life. After a big “Boom” this rock finds itself self aware about the world around him as he sits outside a volcano, only to be stepped on by humans millions of years later. This rock is later hit by a meteor, gets run over by a truck that “breaks” him up. His journey has just began as he eventually transforms into  a sedimentary rock. How does his journey finally end? well you have to read his story to find out. 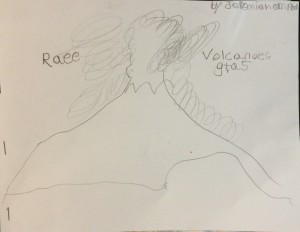 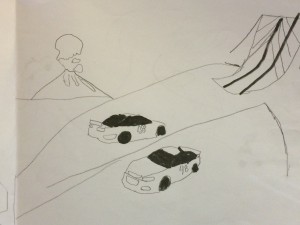 Race Volcanoes GTA5, this is a picture book story by Jeremiah. This story takes the reader through an amazing car race that is interrupted because of a volcanic eruption. The drivers find themselves running from a volcano only to land in a river. What does this story have to do with an igneous rock? All of us want to know. 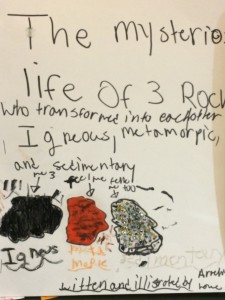 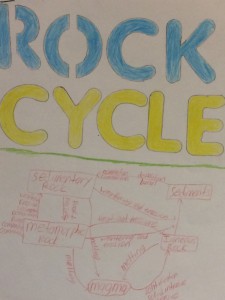 “The Mysterious Life of Three Rocks” – who transformed into each other! this story is from Arnelie. In this four chapter book Arnelie teaches her readers about how rocks  are formed. Her mystery begins with  the disappearance of the dinosaurs and all the evidence scientist uncover when they research rocks. Annelie’s lets us know that her “story may  sound crazy but it’s true”.

The Rock Cycle – “In the rock cycle  there are many transformations and changes going on in this process”. This story has a serious tone and gets right to the point of explaining all three types of  rocks. If you are a students who just wants  the facts, this is the story for you to read 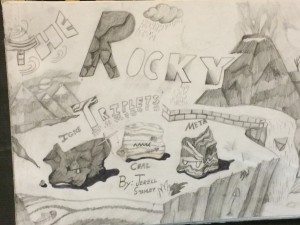 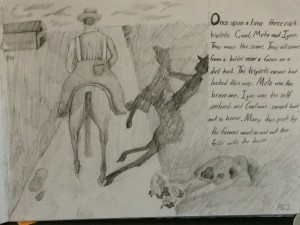 In “The Rocky Triplets” story, Jerell introduces his readers to Igne, Coal and Meta. All three rocks”came from a bolder near a farm on a dirt trail. Meta was the brave one, Igne was the self centered and Coal was smart but not so brave”. These three brothers faced the”pebble gang”, several transformations, numerous natural disasters and their journey ends with a family reunion. Jerell’s illustrations are true to life and allows the reader to travel along the journeys of each character.