Aerodynamics is the study of “how air flows around a plane”,  but where did we get the idea that people could fly?

The following information was obtained from nasa.gov

Myths and Legends of Flight

Greek Legend – Pegasus
Bellerophon the Valiant, son of the King of Corinth, captured Pegasus, a winged horse. Pegasus took him to a battle with the triple headed monster, Chimera.

Icarus and Daedalus – An Ancient Greek Legend
Daedalus was an engineer who was imprisoned by King Minos. With his son, Icarus, he made wings of wax and feathers. Daedalus flew successfully from Crete to Naples, but Icarus, tired to fly too high and flew too near to the sun. The wings of wax melted and Icarus fell to his death in the ocean.

Around 400 BC – China
The discovery of the kite that could fly in the air by the Chinese started humans thinking about flying. Kites were used by the Chinese in religious ceremonies. They built many colorful kites for fun, also. More sophisticated kites were used to test weather conditions. Kites have been important to the invention of flight as they were the forerunner to balloons and gliders.

For many centuries, humans have tried to fly just like the birds. Wings made of feathers or light weight wood have been attached to arms to test their ability to fly. The results were often disastrous as the muscles of the human arms are not like a birds and can not move with the strength of a bird.

Hero and the Aeolipile

One of the many drawings of gliders

Cayley wrote On Ariel Navigation which shows that a fixed-wing aircraft with a power system for propulsion and a tail to assist in the control of the airplane would be the best way to allow man to fly. 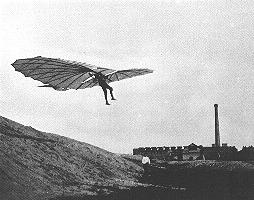 Octave Chanute published Progress in Flying Machines in 1894. It gathered and analyzed all the technical knowledge that he could find about aviation accomplishments. It included all of the world’s aviation pioneers. The Wright Brothers used this book as a basis for much of their experiments. Chanute was also in contact with the Wright Brothers and often commented on their technical progress.

Orville and Wilbur Wright and the First Airplane

Orville and Wilbur Wright were very deliberate in their quest for flight. First, they read about all the early developments of flight. They decided to make “a small contribution” to the study of flight control by twisting their wings in flight. Then they began to test their ideas with a kite. They learned about how the wind would help with the flight and how it could affect the surfaces once up in the air.

Humankind was now able to fly! During the next century, many new airplanes and engines were developed to help transport people, luggage, cargo, military personnel and weapons. The 20th century’s advances were all based on this first flights by the American Brothers from Ohio.